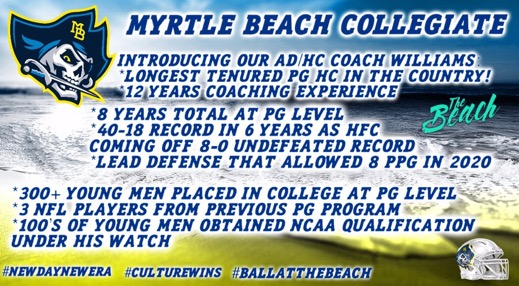 Garden City, SC – The program is excited to announce Ryan Williams as the next Athletics Director/Head Football Coach. Coach Williams joins MBC after 8 years leading one of the most well known trademarks in PG (prep) football. Coach also boast a 40-18 record in that span with no losing seasons in his career as a player or coach. Coach Williams is widely respected amongst college coaches as he is the longest tenured coach at the PG level. “The core values of this program will be accountability, resilience and effort” Williams said on a conference call last week. Last season Coach Williams went undefeated against a schedule that consisted of Fork Union, Birmingham Prep, Georgia Prep Knights and beat Myrtle Beach Prep twice. The most important stat for Coach Williams is the fact he’s placed 300+ young men in college at the NCAA level. “I’m excited to get to work and take over here at Myrtle Beach Collegiate! MBC reminds me of my previous job just needs some love and detailed attention then we could be well on our way to being one of the top PG prep schools in the country,” said Williams. Coach Williams expertise in the field of post graduate prep schools has lead to him being featured in many different publications and streams of media. Examples of those are NY Post, USA Football, Coach and Coordinator Podcast, Never Had It So Good sports radio and Charlotte Insiders. An example of schools coach has placed young men: