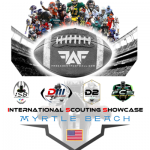 Myrtle Beach, SC – The Marauders will be a part of the FAF International Scouting Showcase (FAFISS) hosted by FreeAgentFootball.com (FAF). After conversations of the past few weeks Coach Brandon Ikard has been asked by Head Coach Josh Resignalo to serve as the Defensive Coordinator for the NCAA D1 FCS team for this All-Star event! With his appointment as Defensive Coordinator, Coach Brandon Ikard was given the opportunity to bring his defensive staff on board as they coach the NCAA D1 FCS team. The FAF ISS will be taking place December 19-21 in Myrtle Beach, SC.

When asked about this opportunity Coach Ikard said, “I feel this is a great experience for our staff, the program, and most importantly future athletes. This opportunity allows for our organization to make so many new connections with college coaches and scouts at all levels and divisions.” 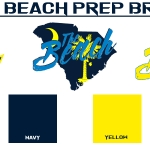 Myrtle Beach, SC – After parting ways with SSA the advisory board for Myrtle Beach Prep went back to the drawing board to create their own brand identity. This process was started to allow the organization to re-branding with new colors, logo, and mascot going forward into their second season. During this process the organization went through a variety of colors schemes, mascot names, and logos. The variety has been carefully narrowed over the last few weeks until the board finally has made their selections for the team going forward.

The team will be referred with as the Myrtle Beach Prep Marauders. Their primary team colors will be “Beach Blue”, Navy, Yellow, and Grey. As for the new primary logo it will take the place of the logo which has been used over the past few weeks. Myrtle Beach Prep will, however, retain their other logos as a secondary and alternate logo. The secondary logo, which has been used most recently, consist of the State of South Carolina and the palmetto tree with script “The Beach” logo through it, and as for the alternate logo they will continue to use the script “The Beach” logo which has been used since their inception.

For more information about Myrtle Beach Prep Post Graduate Academy they can be reached via email at info@myrtlebeachprep.com or by phone at (843) 486-8460. 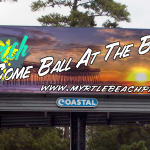 Myrtle Beach, SC – There has been a change in direction for the Myrtle Beach Prep program. After a mutual agreement back in April to bring Southern Sports Academy in as a partner organization to their program their plans have changed. When bringing SSA aboard the main goals were for SSA to assist the process of building a multiple sports to the program.

In this mutual agreement Myrtle Beach Prep would be responsible for working to grow and maintain their new football program, whereas SSA would concentrate on the addition of basketball, both for men and women, as well as track and field. The plans were set in motion to work for completion of this process during the 2019-2020 season. After in depth examination of the true vision of the program Myrtle Beach Prep found it as a non-necessity for the addition of multiple sports to the program.

After the organization made this decision they had representation inform the founder of SSA. The two program did come to an agree to have a working relationship with regards to the future of each program. Myrtle Beach Prep will be responsible for continuing their athletic program as the only Post-Graduate Prep football program in Myrtle Beach and will continue to represent Horry County in a positive manner. Even though SSA and Myrtle Beach Prep are no longer working together MB Prep wishes nothing but the best for SSA in their future endeavors. Myrtle Beach Prep will be changing their logo and colors as a sign of respect and a clear distinction between themselves and Southern Sports Academy. SSA will continue to use their old color scheme of purple and black, as well as, retain the mascot and logo the Panther. The color scheme, jersey design, and much more will be relieved over the next few week for the Myrtle Beach Prep program as they look forward to the 2020 season, and as they continue to use their platform to assist young men in striving for their goals.

For more information you can call our office at (843) 486-8460 or email the program at info@myrtlebeachprep.com 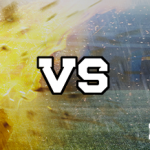 This will be the first test for new Head Coach Brandon Ikard as the team travels to Lancaster, SC to take on the Black Knights. When asked what the Panthers did to prepare for the upcoming game Ikard said, “Honestly, we just went back to the basics. Understand what our identity as a team needs to be going forward.” This will be a big test for the Panthers as they take the road for not only their first conference game but also their first game away from Myrtle Beach. Kickoff off at 2:05 pm this Sunday. 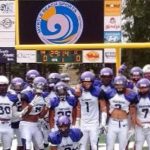 Myrtle Beach, SC – Myrtle Beach Prep has made a change in the leadership of it’s football program. Athletic Director Chris Jones announced that he would be promoting Associate Head Coach Brandon Ikard to Head Coach of the Panthers immediately going forward.

Chris Jones had been the programs only coach and athletic director since its inception back in 2017. During Jones’ tenure as Panthers Head Coach the Panthers accumulated a 9-8 record over two plus season.

Jones announced the decision and the move to step down in his role as Head Coach to spend more time preparing the program to add men’s and possibly women’s basketball in the fall of 2020. “I just had a feel as though it was time to make the move. Brandon has shown me that he can handle the day-to-day needs of being a Head Coach, and this will allow me to place all my focus and energy on the next step in building our program.” Jones said.

Ikard came to Myrtle Beach Prep after most recently spending 4 years as an Assistant Coach at Maiden High School in Maiden, NC. Prior to that he spent six years playing and coaching in various professional indoor football leagues. Ikard said, “I’m excited for the new opportunity and has nothing but thanks to Coach Jones for the chance to continue on with something he has built to this point.”

Myrtle Beach Prep is currently 1-2 this season with their next home game being October 5th. 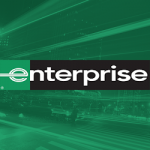 Myrtle Beach, SC – The Myrtle Beach Prep Panthers have partnered with Enterprise Rent-A-Car for the 2019 Season, the team made the announcement on Tuesday, September 17th, 2019. 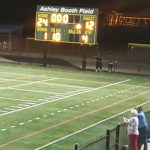 Myrtle Beach, SC – The Myrtle Beach Prep Panthers defeated Jersey Coast Prep 24 – 12 to pick up their first win of the 2019 season. The Panthers getting back on track after returning from evacuation and having to postpone a game due to Hurricane Dorian.

The Panthers get their first win in with a dominating performance on defense. The Panther defense shut down the Jaguars only allowing one touchdown and adding a Safety as well. The Panthers defense had timely interceptions by Spencer Parris and James Woods, Jr., and constant pressure on the QB by the Defensive Line lead Jamiyah Harrison and Mike Johnson.

Offensively the Panthers are still looking to work out the fine details but seem to be putting it together. Daveon Ray went 11 – 26 for 86 yards and added 2 rushing touchdowns. Tylor Stinson lead all rushers with 79 yards on 9 carries and accounted for the other Panthers touchdown as the run game seemed to wear the Jaguars down. Wide Receiver Montrell Stinson hauled in 61 yards on 4 catches while Anthony McNair added 37 more yards on only 4 receptions.

The Panthers will play at home again this weekend as they strive to get better. Come out and support your Myrtle Beach Prep Panthers this Sunday, September 22 at 4:00 PM as they take on Fork Union.

For more information about tickets, sponsorship opportunities, donations, or just to learn more about our program contact us by phone at (843) 486-8460 or through out CONTACT page. 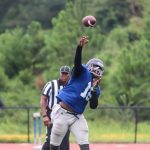 RALEIGH, N.C. (Aug. 24) – Offense, defense and special teams all had their moments in the Saint Augustine’s University intrasquad scrimmage on Saturday at the George Williams Athletic Complex.

“Offense and special teams did really well,” SAU Head Coach Tim Chavous said. “Defense is going to be fine. We are going to be pretty good, definitely better than last year.”

Chavous was impressed with Gilliard, who is projected to be the season opening starter at quarterback. Gilliard threw all four scoring strikes, including touchdown scores of 38 and nine yards to Anthony Berry (So./Kinston, NC). He found Kam Pugh (Jr./Birmingham, AL) for a 12-yard score and Demetrius Johnson (Jr./Baltimore, MD) for a 35-yard touchdown.

“Gilliard proved today that he can lead the offense,” Chavous said.

“The defensive line was stellar,” Chavous said. “They did not jump offside one time. Harris and Casey both stood out as well as our kickers.”

The Falcons, who finished 2-7 overall last season, have two more weeks to prepare for their season opener against Lenoir-Rhyne University on Sept. 7. Kickoff is 6 p.m. in Hickory, N.C. 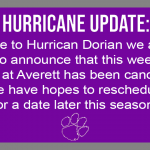 No game this weekend due to Hurricane Dorian.

MYRTLE BEACH, SC – The Myrtle Beach Prep Panthers are proud to announce today the renewal of their current partnership with American Fitness for the 2019 Season. American Fitness is a 28,000 square foot health and fitness center located in Murrells Inlet.

Not only does is the facility filled with state-of-the-art equipment, but also have a wide variety of fitness programs and classes. “Since our inception here with Myrtle Beach Prep we have hoped to have a partnership like the one we have American Fitness,” states Athletic Director Chris Jones. With the renewal of this partnership the Myrtle Beach Prep students will have a state of the art gym to continue their growth physically as athletes.

Battle at the Beach (On time)